The final days of my trip to Uganda consisted of pure, lighthearted adventure. The other voyagers and I traveled up to the northern Nile and stayed in Murchison Falls National Park. The African savannah is absolutely beautiful and nearly surreal. To physically be in a place I had only read about as a little girl was dreamlike. It took a minute for my brain to realize that I was actually seeing baboons playing, giraffes eating, elephants walking, and even a few lions basking in the sun right out my window.

Each place I stayed in Uganda was brilliant. I kept thinking to myself that it surely could not get any better, and then we would move on and I would be proven wrong again. Our final stay was at Paraa Safari Lodge, which was so nice I felt like I was on a high class vacation and not a mission trip. It sat right along the Nile River and personified the perfect tropical paradise.

One part of the lodge that stood out to me, however, was the bookshelf in the main lounge. It was just a normal bookshelf, but all of the books were the wrong way. Now, when I say ‘the wrong way’ I do not mean that their spines were facing inward and the pages outward; they were all lying down horizontally on their covers in carefully arranged stacks. 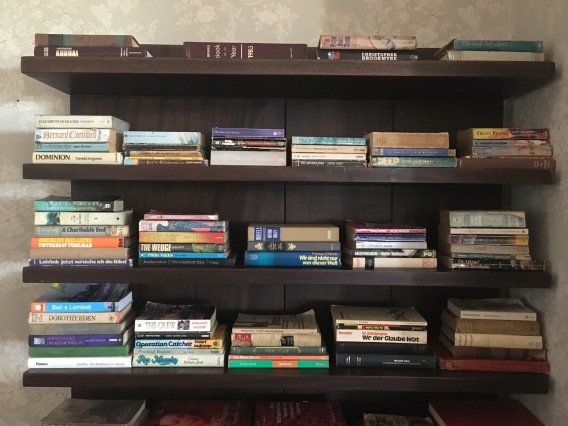 I had never seen a bookshelf organized like that in my life. I found it odd, but so very intriguing at the same time. Maybe it was simply for aesthetic, or as a means of artwork; it was a talking point by my terms at least. Perhaps it actually was done for functionality and with purpose.

In my contemplating thoughts, it hit me. Why did I automatically assume the way the books were lying was wrong? For something so inconsequential, I was very quick to judge and label that wooden bookshelf as erroneous.

I think entirely too often, we get caught up in our own ways—how we like to think about and act upon things—and instead of taking the time to acknowledge others’ opinions and ideas, we automatically assume they are incorrect.

Knowledge is the root of wisdom, and is acquired by an awareness of supplementary matters, philosophies, and designs floating in the lives of others. Proverbs 24: 23 reads:

“These are also sayings of the wise. Partiality in judging is not good.”

I evaluated the bookshelf in partiality to my personal accumulation of knowledge. After all, that is the only information on which I have to make judgements. The reality of prejudice is that it is always laid upon a foundation of individual knowledge; in twenty years of experiencing and witnessing bigotry, I have concluded that we are all simply too obtuse and senseless to pass judgement on others, not because we are lacking, but because we are human. All the knowledge in the world could not save us from ourselves.

Who knows? It could be I am the one arranging her books in a peculiar manner. The thing I think we all need to appreciate is the distinction between being wrong and being different. The way that bookshelf was structured was in fact different than what I was accustomed to, but nothing about it was wrong. In fact, the more I thought about it, the more I liked the idea of books lying on the shelf in sideways stacks. It was visually very interesting, even though there were some functionality quirks I still had to work out.

In the end, as homage to the message evoked, I decided to change my own personal bookshelf around a little bit. Now, every other shelf is lined with books the way I have always had them, and the remaining shelves are stacked with books the way I saw them in Uganda. It is a reminder and signifier to myself that integrated ideas are, most often, much more effective and better than the ones living alone in my head. I have to listen to what others have to say, consider their views, and take them seriously, just as I hope someone would do for the ideas I have to bring to the table… or in this case, the shelf.